Harvest time is up and risk arises of possible mycotoxin contamination that may decrease production results.

95% of mycotoxins in the feed are produced in the field. There is not necessarily visible fungal growth in contaminated grains. The EU has set maximum values for the individual toxins in feed, but we have to remember that reaction of contamination with several toxins is unpredictable - even in small concentrations.

The situation is not stable from one year to another. Wet and cool conditions favor the growth of Fusarium molds which can infect the plant during all growth periods and the level of toxins may increase.

This year we have experienced wet and cool weather during the blossom-time of crops which increases the risk of a high toxin pressure.

The forecast for the coming harvest indicates potentially moderate to high levels of DON in European wheat. Results of statistical analysis reveal that many parts of Europe can expect potentially harmful levels of mycotoxin contamination in the upcoming 2021 wheat harvest. 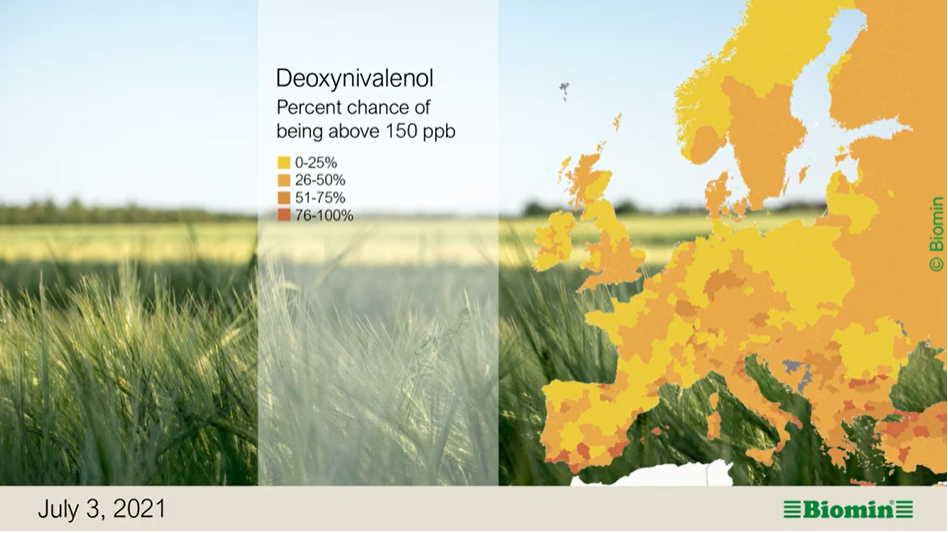 In addition climate changes and increases in mycotoxin contamination and co-contamination may promote new mycotoxins appearing in regions where they are not commonly found today.

As a consequence the presence of mycotoxins can cause adverse health effects in animals going from reproductive problems and immune deficiency to gastrointestinal and skin disorders.

In addition to impairing animal performance, mycotoxins are causing several subclinical effects. They can occur due to the toxic effects of mycotoxins causing an increase of susceptibility to diseases and a decrease in vaccine efficiency or feed intake within the animals. These impairments in fact will then eventually lead to economic losses during animal production.

The cost of the above mentioned problems will typically be greater than the addition of toxin binders. Until we have an overview of the harvest situation we recommend to use the toxin binder X-Bond preventively to protect your herd against mycotoxins.

Get to know more on the toxin binder X-Bond?

The toxin binder series called X-Bond minimises and prevents the risk of mycotoxins.

suspicious of mycotoxins ending up in the feed?

read our guide on mycotoxins

Get the latest valuable insights when our nutritionists share their knowledge and experience on healthy nutrition for swine and cattle.